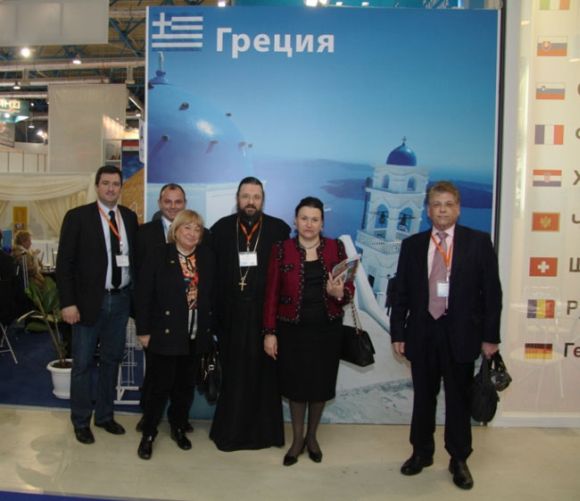 The Church of Greece unfolded its strategy to attract tourists to the country’s sacred religious sites at a recent press conference held on the sidelines of the 20th edition of the Moscow International Exhibition Travel & Tourism (MITT) taking place in Russia. 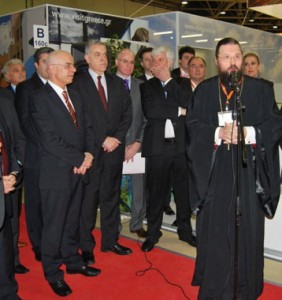 Greek Secretary General of Tourism Anastasios Liaskos (left) looks on as the representative of the Holy Synod of the Church of Greece and Secretary of the Synod office of pilgrimage tours Archimandrite Spyridon Katramados gives a speech at the inauguration ceremony of the GNTO stand at MITT 2013. Photo source: http://www.ecclesia.gr

The Holy Synod of the Church of Greece is represented at MITT 2013 by the Secretary of the Synod office of pilgrimage tours (religious tourism) Archimandrite Spyridon Katramados.

During the press conference, Archimandrite Spyridon informed Russian journalists on the intention of the Greek Church to promote the religious, historical, cultural and ecological character of Greece’s religious heritage for tourism purposes.

According to Archimandrite Spyridon, the Greek Church will follow a tourism strategy based on collaborations with the Cathedrals of the Church of Greece and other Orthodox and Christian churches, government agencies and local authorities in Greece and abroad and tourism professionals within and outside Greece.

In regards to the cooperation agreement signed a few months ago between the Russian Church and the Church of Greece, Archimandrite Spyridon said already various actions were under development. 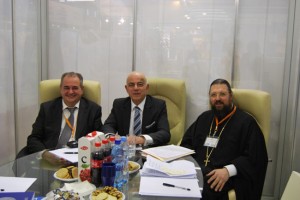 MITT 2013: GNTO Secretary General Panos Livadas, Greek Secretary General of Tourism Anastasios Liaskos and the representative of the Holy Synod of the Church of Greece and Secretary of the Synod office of pilgrimage tours Archimandrite Spyridon Katramados. Photo source: http://www.ecclesia.gr

He informed journalists that the Greek Church’s Synod office of pilgrimage tours (religious tourism) was available to act as a liaison between travel agencies and Greece’s churches and monasteries to facilitate pilgrimage tour packages for foreign visitors in Greece.

The Greek Church is among the 57 Greek exhibitors hosted this year at the Greek National Tourism Organization’s (GNTO) stand at MITT 2013.

The participation of the Greek Church is based on the protocol signed in January with the Tourism Ministry for the development of religious-pilgrimage tourism in Greece.

Last year the MITT expo attracted some 83,000 visitors of which 74 percent were tourism professionals.

Crete To Shine In Athens Next Month