Demolitions On Crete Postponed Due To Tourism Season 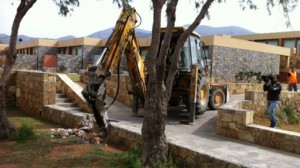 Scheduled demolitions of constructions erected illegally on the coast of Crete have been postponed until the end of the summer, according to Greek press reports.

Following two recent demolitions by decentralized government crews of an illegally built seaside tavern on Tobruk Beach in Heraklion and an illegal structure of a hotel complex in Malia, the Crete Travel Agents Association sent a letter to Greek Prime Minister Antonis Samaras and requested for the postponement of the demolitions until after the tourism season.

In the letter, the travel agents said the images of the island’s demolished establishments made headlines in the international media and would “scare off” tourists and discourage them to come to Greece just before the start of the season.

As a result, the general secretary of Decentralized Administration of Crete, Yiorgos Diktakis, suspended scheduled demolitions until the end of this year’s tourism season.

According to reports, the demolitions will continue in October 2013.