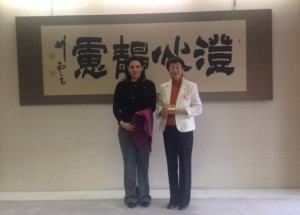 Greek Tourism Minister Olga Kefalogianni was briefed on the reconstruction efforts of the earthquake-stricken area of Sendai City in Japan, today, 13 March, two years after a massive earthquake hit the northeastern coast.

During a meeting with the city’s mayor Emiko Okuyam, Mrs. Kefalogianni expressed her sympathy to the families of the victims and her admiration for the efforts of the Japanese people to overcome the devastating effects of the earthquake. She gave Ms. Okuyama two drawings of pupils from schools in Thessaloniki.

“The Greek people can understand the problems faced by the people of Sendai city and the region in general, as they too are also being tested, socially and economically, due to the recession plaguing the country,” the tourism minister said after touring the city.

“We do not stop though, we look ahead and move on,” she said.

The tourism minister’s visit to Sendai took place within the framework of her official visit to Tokyo to strengthen the tourism cooperation between Greece and Japan.