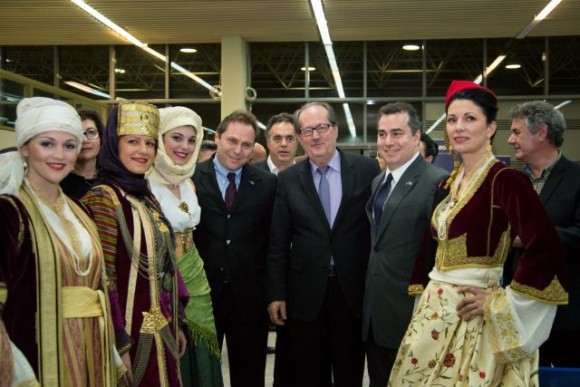 From left: Eftichios Vassilakis, vise president of Aegean Airlines; Panagiotis Nikas, Mayor of Kalamata; and Achilleas Constantakopoulos, managing director of TEMES, with members of the Lyceum of Greek Women who welcomed the first passengers from Munich at “Captain Vassilis Konstantakopoulos” Airport in Kalamata. “I am touched to see that the airport bearing the name of the late Captain Vassilis Konstantakopoulos will now be a base for one of our aircraft. Without his contribution, none of us would be standing here today,” Mr. Vassilakis said.

“Kalamata is now the 7th Aegean operational base, established in recognition of the impressive power of investment and the efforts of the various agencies involved, and the prospects for tourism in Messinia and the Peloponnese in general,” Aegean Airlines Vice President, Eftichios Vassilakis, said recently during the opening of the airline’s new operational base in Kalamata. 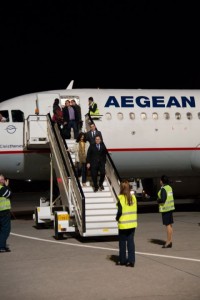 During the official event to mark the launch of Aegean’s operations at Kalamata, the first of the company’s flights from Munich touched down – flight A3 481, carrying 100 passengers, including Eftichios Vassilakis and Achilleas Konstantakopoulos and Konstantina Nikolakou, Deputy Regional Governor for Development-Projects-Regional Information.

The airline’s new operational base offers flights to nine destinations in five countries from the “Captain Vassilis Konstantakopoulos” Airport in Kalamata.

On the occasion of the arrival of the first direct flight from Munich, an official event was held to mark the opening of the new operational base.

The first direct flights from Sweden and Germany arrived on 9 and 10 March, respectively, while by May flights will have been gradually introduced from Kalamata to four destinations in Russia (Moscow, St. Petersburg, Kazan and Rostov), two destinations in Sweden (Stockholm and Gothenburg), Germany (Munich) and Israel (Tel Aviv), as well as the Ukraine (Kiev).

When the full program is in place Aegean will operate 12 flights a week to the above destinations, using an Airbus A320/319 with cockpit and cabin crews based in Kalamata.

“Thanks to the Costa Navarino, Messinia is the first region in Greece to be opening for visitors from the beginning of March, and thereby extending the annual tourist season,” Mr. Vassilakis said.

“It is our duty to support this exemplary initiative, which is the qualitative objective we all need to follow,” he said.