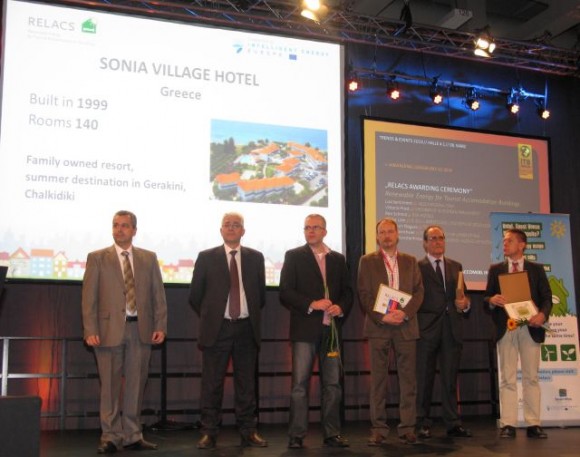 Owners of the hotels that came in first, second and third place for the RELACS EU prize on stage at the award ceremony within the ITB fair on Friday, 8 March. 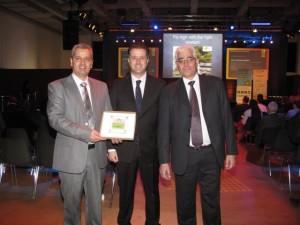 The Sonia Village Hotel located in Chalkidiki came in first place and was honored for reducing its environmental impact and offering greener tourism at the RELACS (REnewabLe energy for tourist ACcommodation buildingS) award ceremony held last week during the ITB Berlin 2013 trade show. Hotels in Austria and Spain came in second and third place.

RELACS is a European project, financed in the framework of the Intelligent Energy Europe Program and has the key aims of encouraging tourist accommodation buildings to reduce energy use and to integrate renewable energy technologies.

The Sonia Village Hotel, a family owned resort in Gerakini, Chalkidiki, built in 1999 and comprised of 140 rooms, boasts a number of energy saving and environmentally friendly features. 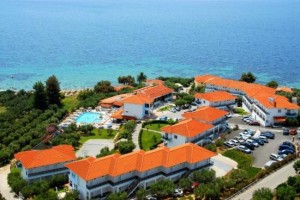 The owners of the hotel, Christos Kougionis and Margaritis Kougionis, have added a range of energy efficiency improvements to the hotel, under the supervision of Dr. Kostas Konstantinou, mechanical engineer, manager of Regional Energy Agency of Central Macedonia, to reduce its impact on the environment:

The RELACS project consortium consists of participants from Italy, Portugal, Sweden, England, Spain, Greece, Austria, Hungary, Bulgaria and Germany and has focused on the issue energy efficiency in tourism and developed a network of some 200 tourist accommodations during the last three years.

The network members are offered energy consulting and feasibility studies, seminars about renewable energies, energy efficiency and funding schemes as well as study trips and exchange of experience.