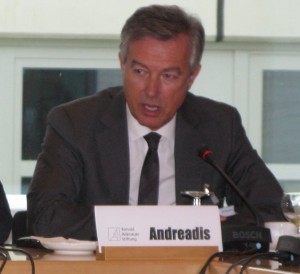 Greece’s success stories will be communicated to the country’s target markets through the new private company “Marketing Greece” as of this May, according to the president of the Association of Greek Tourism Enterprises (SETE) Andreas Andreadis.

Speaking today, 7 March, at an event held at the Konrad Adenauer Foundation in Berlin, on the sidelines of the ITB Berlin trade show, Mr. Andreadis explained the concept of the new company to the Greek and German media.

“Marketing Greece,” which is expected to begin operation within the month, will play an essential advisory role on the promotion of Greece’s brand and sub-brands (themed destinations) through the latest marketing tools (social media, world class website, etc.).

“Right now the world knows that Greece is open during the summer period for three months… we intend to change that and show that Greece welcomes tourists all year round,” he said.

Speaking on this year’s tourism season, Mr. Andreadis was optimistic and referred to data that indicated a 20 percent increase from the UK market and a 15 percent rise from the German market.

SETE’s president also said that visitors from Russia this year are expected to surpass 1.2 million.