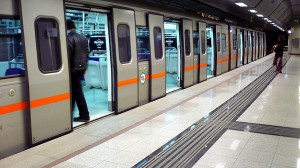 The two new metro stations of Peristeri and Anthoupoli on the western extension of line 2 (red line) in Athens will open and begin serving passengers in early April, it was recently announced.

Also, the four new stations on Vouliagmenis Avenue, Ilioupoli, Alimos, Argyroupoli and Elliniko on the southern extension of line two are expected to be running as of this July. The Haidari station on line 3 (blue line) should open by September.

Once all seven new stations are running they are expected to serve 160,000 new commuters and reduce the number of cars on the roads of Athens by 30,000 each day, reducing CO2 emissions by 130 tonnes and bringing in 65 million euros in revenues.

In addition to the above seven stations, further metro extensions of line 3 are planned on the Haidari-Piraeus section, with new stations in Agia Varvara, Korydallos, Nikaia, Maniatika, Piraeus and the Municipal Theater. The stations should be complete by 2017.

Bus Routes Shifted In Nikaia Due To Metro Extension