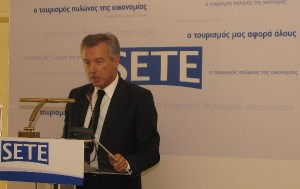 The members of the Association of Greek Tourism Enterprises (SETE) last month voted in favor for the association to participate and therefore establish “Marketing Greece,” a private company to efficiently promote Greek tourism.

At an Extraordinary General Assembly that took place last week, SETE’s Board of Directors informed members on the concept, structure, functions and objectives of “Marketing Greece” through a thorough and comprehensive presentation.

SETE’s members then reviewed and voted in favor of the company’s Articles of Association. “Marketing Greece” is planned to launch in March 2013.

According to reports, two million euros have already been gathered by the private sector to fund the company’s launch.

The company “Marketing Greece” is SETE’s long-awaited venture that initially involved the Greek public sector (GNTO) and the association. It was originally planned for the public sector to hold a 30 percent share in the company.

The GNTO, however, pulled out from the venture due to various reasons (mainly legal issues) and the company’s composition of shareholders was revised: SETE (80 percent stake in the company), the Hellenic Chamber of Hotels (17.5 percent) and the Hellenic Association of Communications Agencies-EDEE (2.5 percent).

Private company “Marketing Greece” aims to professionalize the country’s tourism promotion on a global scale through partnerships with tourism stakeholders of the public and private sector to attract additional international visitors from specific target markets.

Over the years, Greece’s governmental tourism department, the Greek National Tourism Organization (GNTO) was often criticized by tourism professionals of the private sector in regards to the organization’s allocation of finances for the country’s promotion that mainly relied on participation in international tourism exhibitions and mass advertisements in foreign media outlets.

Also highly criticized was that the GNTO would change the brand identity of Greece almost every time with a new message or logo, a practice that was said to cause confusion to international tourism markets.

“Marketing Greece” plans to change all that as it will be staffed with experts from various fields. Among actions, the new company is planned to launch a “world class website,” ideal for the development and promotion of the country’s tourism.

Also, a public relations network will be developed and initially target the markets of Russia, the US, the UK, Germany and France and others in the future.