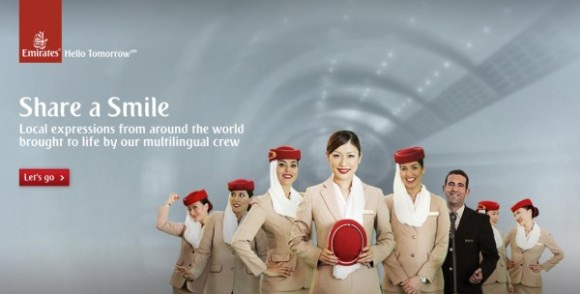 Emirates recently unveiled a new campaign showcasing the lighter side of language. Named “Share a Smile” the airline has created 29 videos in 14 languages featuring members of its cabin crew expressing quirky and unusual expressions and greetings from around the world.

The campaign was created by Emirates to help “globalistas” connect with each other through watching the videos and sharing them with their friends and family. 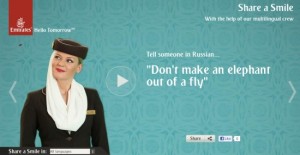 “Share a Smile” is the latest step in Emirates’ global brand campaign Hello Tomorrow, launched in April 2012 that aims to inspire people across the world to explore and connect with each other across cultures and borders.

Through the set of light-hearted 15 second animated videos designed to make people smile, Emirates’ multilingual crew explain the meaning behind popular local phrases like ‘Don’t make an elephant out of a fly’ (Russian), ‘You’re so pretty it made a bang’ (Cantonese) and ‘You’re the cat’s whiskers’ (English). There is also a compilation behind the scenes out-takes video showing the fun the crew had making the films.

The 29 videos in the campaign have been filmed in 14 languages: Arabic, Cantonese, English, French, German, Greek, Italian, Japanese, Korean, Mandarin, Portuguese, Russian, Spanish and Turkish.  They can all be viewed and shared online by visiting: www.emiratesshareasmile.com or Emirates’ You Tube channel, www.youtube.com/Emirates