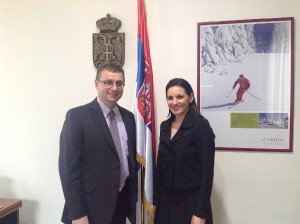 The possibility of Greece and Serbia launching joint religious tourism packages to encourage tourists from faraway destinations to visit both countries was discussed today, 20 February, in a meeting between Greek Tourism Minister Olga Kefalogianni and Serbian State Secretary for Tourism Goran Petkovic in Belgrade.

Among issues discussed was the promotion of Greece and Serbia as city break destinations and the organization of joint cultural events that would link the two countries.

On the issue of tourism education, the Greek tourism minister indicated that Greece operates fully equipped tourism schools that could offer training sessions to Serbs working in tourism.

Mrs. Kefalogianni invited her Serbian counterpart to visit Athens and sign a new tourism cooperation agreement with Greece. The previous tourism agreement between Greece and Serbia was signed in 1959.

According to the Tourism Ministry, some 600,000 Serbs visit Greece each year. “This is a number we aim to increase in the coming years as new avenues of cooperation are opening up between the two countries,” the Greek tourism minister said.

Mrs. Kefalogianni will attend the opening ceremony of the 35th International Fair of Tourism (IТТFА) tomorrow, Thursday, 21 February, in Belgrade.

Greek Enterprises To Get Financial Support For Alternative Tourism Investments