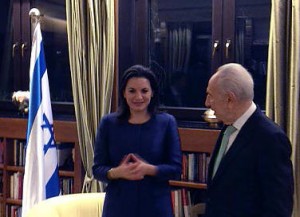 During the meeting, both sides exchanged views on the latest developments in Europe, Greece, Israel and the Middle East. Greece’s economic crisis was also on the agenda.

Mrs. Kefalogianni informed the Israeli president on the significant structural changes taking place in Greece and expressed interest to further heighten cooperation between the two countries. 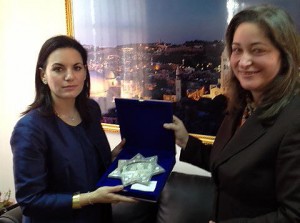 Pilgramige Tourism was among the issues discussed between Greek Tourism Minister Olga Kefalogianni and the Palestinian Minister for Tourism Rula Maayah, yesterday, 6 February, in Bethlehem.

According to a press release by the tourism ministry, Mrs. Kefalogianni is the first Greek minister to visit Bethlehem, a city of the Palestine Authority, following its recognition by the United Nations as a non-member state.

On Tuesday, 5 February, the Greek tourism minister met with her Israeli counterpart Stas Misezhnikov during her visit to the IMTM 2013 expo (International Mediterranean Tourism Market) in Tel Aviv.

The agenda included discussions on further cooperation to strengthen relations in the tourism sector of both countries and ways to attract Israeli investment to Greece.