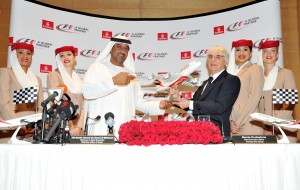 Emirates announced a five year sponsorship deal with the Formula One group, according to which the airline will have trackside branding at most of its races.

The announcement was made today, 5 February, at Emirates’ headquarters in Dubai, by HH Sheikh Ahmed bin Saeed Al-Maktoum, chairman and chief executive of Emirates Airline & Group and Bernie Ecclestone, chief executive officer of the Formula One group.

The value of the sponsorship deal was not disclosed.

According to the deal, Emirates will have a strong branding presence at 15 races on the 2013 FIA Formula One World Championship calendar across Europe, Asia, Australasia, North America and South America.

Starting at the Grand Prix in Malaysia (22-24 March 2013), the distinctive Fly Emirates branding will  be seen at historic circuits such as Silverstone in Great Britain, Monza in Italy and Interlagos in Sao Paolo, Brazil.

As part of the Formula 1 Global Partner agreement, branding will be displayed on circuit bridges and associated ground signs and Emirates will make full use of the world-renowned Formula One Paddock Club.