Heraklion Port yesterday, 17 January, welcomed the Queen Mary 2, one of the most luxurious and largest cruise ships in the world. 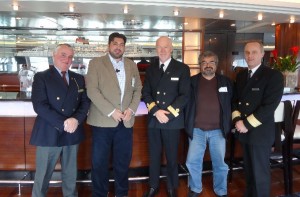 “Heraklion Port is always ready,” was the reply of, Yiannis Bras (second from left), the port’s CEO, when Cunard Cruise Line’s “Queen Mary 2” requested permission to stopover at the port.

Cunard Cruise Line’s “Queen Mary 2” was originally to stopover at Piraeus Port, but, due to bad weather conditions, was refused entrance. The cruise line then requested permission to dock at Heraklion as an alternative.

“The cruise line informed us about the problem and asked if we were ready to welcome the cruise ship in Heraklion on Thursday 17 January. I explained to them that we are always ready,” the CEO of Heraklion Port, Yiannis Bras, said.

The ship arrived in the early hours of Thursday and brought some 2,500 passengers to Heraklion.

Mr. Bras informed the captain of the Queen Mary 2 in regards to Heraklion city and its port. “The captain told us that he would suggest to the company to establish Heraklion as one of the ship’s stopover ports,” he said.

The Queen Mary 2 sailed from Southampton on 10 January  for a 105-day around the world journey. Its first stopover port was Barcelona to be followed by Heraklion. Its next stop is Egypt.

The Queen Mary 2 was the first cruise ship to dock in Crete this year.