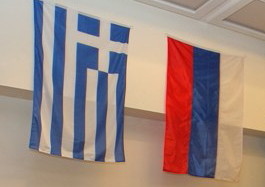 Leading Russian tour operators and travel agents will attend a Greek-Russian tourism forum in Athens next month to further discuss ways of cooperation with the Greek tourism market, the president of the Hellenic Chamber of Hotels, Yiorgos Tsakiris said yesterday, 14 January.

Greece is making efforts this year to strengthen the Russian tourist wave and prospects seem to be very positive since arrivals from Russia  in 2012 were estimated to have exceeded one million (official figures have not yet been released).

In regards to tourism revenue, visitors from Russia are among the biggest spenders in Greece as it is estimated that every Russian tourist spends 20 percent more money on average than the next highest ranked tourist by country of origin.

In regards to this year’s tourism season, Mr. Tsakiris underlined that the positive trend of international bookings to Greece was optimistic only for certain Greek destinations.

He stressed that due to the dramatic drop in domestic tourism, hotels in certain Greek regions (such as Central Macedonia, Epirus, the Peloponnese) were facing a very difficult situation. “These destinations do not have access to international arrivals,” Mr. Tsakiris said.

For the past two years, Greeks have become more modest in spending on travel in their country due to continuous austerity measures (salary and pension cuts, layoffs and tax hikes).

It is estimated that domestic tourism in Greece dropped some 20 percent last year.