Helvetic Airways To Fly To Greece This Summer 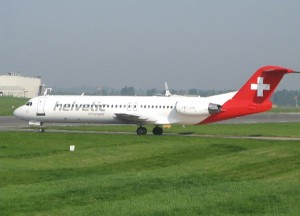 Swiss budget airline Helvetic Airways will feature a number of new Greek island destinations for the 2013 summer season, according to a recent announcement.

The airline, in association with Kuoni Travel, the largest tour operator in Switzerland, plans to include the islands of Kos, Santorini, Mykonos, Zakynthos, Corfu and Heraklion (Crete), among its new summer 2013 destinations.

According to reports, the airline has started services to a number of destinations all over Europe out of Zurich and is selling all tickets at a fixed price. Each one-way flight to any destination is sold for 99 euros, excluding taxes.

Helvetic Airways was founded in autumn 2003 to serve destinations in South-Eastern Europe. It is based at Zurich airport and has a fleet of seven Fokker 100 aircraft.

Emirates A380 Departs From New Concourse A