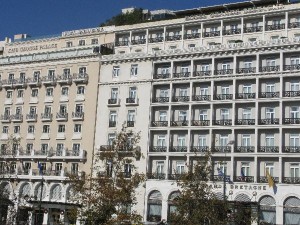 Eurobank recently reached an agreement with hotel group Lampsa SA for the leasing of the King George Palace on Syntagma Square. Lampsa is the owner of the adjacent Hotel Grande Bretagne.

The agreement concerns a long-term lease of 20 years with a fixed annual rental rate of 700,000 euros. Leaseholder Lampsa has a preference right for the sale of the King George Palace should the bank ever decide to sell.

The agreement is expected to be activated in the first quarter of 2013.

According to reports, the King George hotel will operate under the umbrella of Starwood Hotels and Resorts as a separate hotel of The Luxury Collection with its own reception. Due to the proximity of the two buildings, the hotels will share the same administrative staff and workforce. Lampsa is said to soon move forward with upgrade investments of the rooms and suites of King George and its connection with the Grande Bretagne.

The King George hotel will maintain its identity since it is already a highly recognizable brand abroad.

Since 2001, the Daskalantonakis Group held the management of the King George.

Reports said tenders would launch in early 2013 for the sale of Astir Palace Resort and the new management of the Makedonia Palace in Thessaloniki.