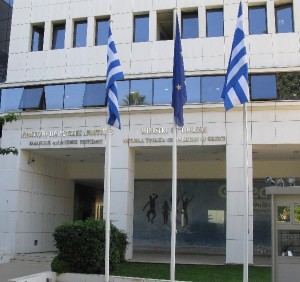 The GNTO main headquarters in Athens.

Greek Tourism Minister Olga Kefalogianni ordered a probe into the finances of the Greek National Tourism Organization (GNTO) after an embezzlement scam against the organization surfaced during the recent Christmas holiday.

According to English daily Kathimerini, five suspects were arrested on embezzlement charges earlier this week after they allegedly attempted to extract money from the GNTO’s funds. All suspects face felony charges of embezzlement, fraud, forgery and setting up a criminal organization. They were scheduled to face a prosecutor today, Friday, 28 December.

Among those arrested include Costas Vasilakos, a former special adviser to the GNTO’s former general secretary Nikos Karachalios.

The scam began to unravel last Friday, 21 December, when Mr. Vasilakos attempted to cash a 147,000-euro GNTO check bearing Mr. Karachalios’ signature. According to reports, the sum of money was for “payment” of hotel services never provided.

During questioning, Mr. Karachalios insisted his signature was forged and then disclosed that 12 million euros were missing from the coffers of the organization, according to accountants that inspected the GNTO’s books in early December. (Mr. Karachalios resigned from his post at GNTO on 20 December.)

A team of inspectors from the General State Accounting Office will be probing the finances of the organization to follow up on the claims.