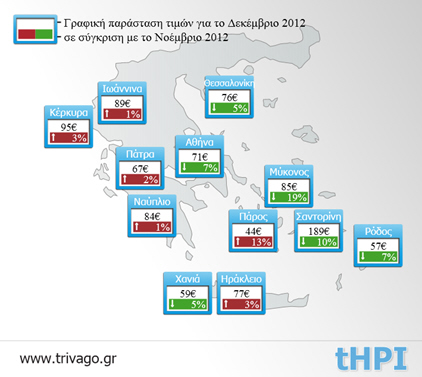 Christmas is just around the corner and while this month is considered the prime winter tourism season, hotel prices in Greek winter destinations are sliding, according to online booking company Trivago.

According to the results of the company’s Hotel Preis Index (tHPI), for the month of December, hotels in almost all major Greek cities have dropped their prices compared to the previous month.

More specifically, in Athens, the average rate for a double room stands at 71 euros, which is a seven percent decrease compared to November. According to the data, the Greek capital can be considered a cheap city destination this Christmas.

In Thessaloniki, hotel prices have dropped by five percent compared to the previous month with the average rate standing at some 76 euros.

For example, hotels on the island of Paros have increased their prices by some 13 percent with an average rate of 44 euros for a double room.

On the other hand, hotels in Ioannina, one of Greece’s prime winter destinations, increased their prices by only one percent compared to November. The average rate for a double room in Ioannina currently stands at 89 euros.

Trivago said hotel prices have also dropped this month in many “Christmas capital cities” such as London, Rome and Paris compared to November.

Reports said that among 24 European cities, Athens is the seventh cheapest in regards to hotel prices this December.