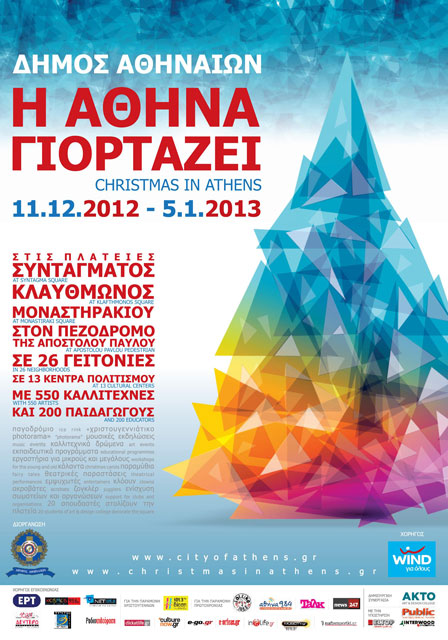 The City of Athens will put on its festive best this holiday season and aim to put a smile on the faces of Athenian citizens, particularly during this difficult period.

“In the face of these harsh and difficult times, the city is still alive, is putting up a fight and will become celebratory,” Athens Mayor Giorgos Kaminis said, today, Wednesday, 5 December, while presenting this year’s events for Christmas and New Year’s in the Greek capital.

Musical events, art events, educational programs, workshops for children and adults, storytelling, theater, animators, clowns, acrobats, jugglers and carols are just some of the many surprises that await Athenian citizens from 11 December 2012 until 5 January 2013. 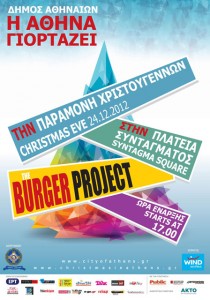 Don’t miss “The Burger Project” on Christmas Eve at 5pm on Syntagma Square!

The City of Athens has planned a series of events in Syntagma, Monastiraki and Klafthmonos squares that will spread throughout 26 neighborhoods and 13 cultural centers with 550 artists.

The holiday events will launch Tuesday, 11 December, with the illumination of the city by Mayor Kaminis at Syntagma Square.

According to the City of Athens, the 16 trees are distinguished for their inspiration and originality and will be the alternative, inventive and imaginative proposal adornment of the city’s most luminous square. 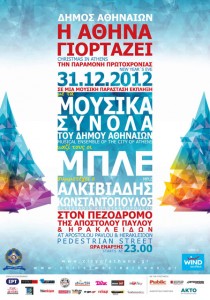 Ring in the New Year at Apostolos Pavlos pedestrian walkway!

This Christmas season, Syntagma Square will host 18 bodies that will inform and raise awareness among citizens and strengthen the concept of solidarity.

From 21 to 29 December, Klafthmonos Square will be the city’s music center with 20 music bands giving festive performances!

From 22 to 29 December, an atmosphere of celebration will be felt in Monastiraki with street dance groups, music and surprises for passersby.

On Monday, December 31, the City of Athens will usher in the New Year at the Apostolos Pavlos pedestrian walkway with a surprise show starring the Music Ensembles and Greek music group Ble.

Also, the major sponsor of the City of Athens’ holiday celebrations, WIND, will provide a 200 square meter ice skating rink to visitors of Syntagma Square.

The City of Athens program of Christmas and New Year’s events can be found here.

A Christmas Carol at Technopolis