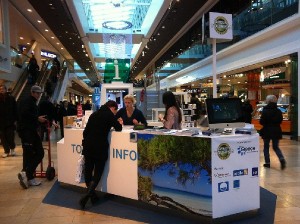 Thousands of Swedes were informed last week on Greek green tourism practices at a special booth set up in the main entrance of the Gallerian shopping mall in Stockholm, Sweden.

During 23-24 November, visitors to the Gallerian mall were well informed on the Green Key hotels and Blue Flag marinas and beaches in Greece and received the “Green Tourism in Greece” magazine (the first and only publication for green tourism in Greece) and maps with all the blue flags in Greece.

According to a press release, during the two-day campaign, some 120,000 Swedes passed by the Gallerian mall and Greek green tourism booth.

It is reminded that the Hellenic Society for the Protection of Nature manages the Greek Green Key and Blue Flag programs. Organizer of the “Green Tourism in Greece” campaign is North Events Limited that showcase Greek tourism, culture and gastronomy in the Nordic markets.

A Christmas Carol at Technopolis