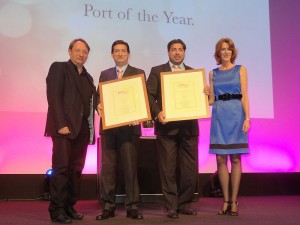 “Even in this difficult period, Greece can have positive news and make everyone proud. With hard work, strategic planning and targeted small steps we managed to succeed,” Ioannis Bras, chairman of the Heraklion Port Authority (second from right), said upon receiving the award for second place in the “Port of the Year” category at the sixth Seatrade Insider Cruise Awards.

Heraklion Port shined during the leading cruise industry event Seatrade Med 2012, held 27-29 November at Marseille, France, as it came in second in the “Port of the Year” category at the sixth edition of the Seatrade Insider Cruise Awards.

NY Cruise Port, USA, came in first place and Port of Cartagena, Spain, came in third, out of a total of 70 entries from around the world. The “Port of the Year” award is given to a port authority or management company that has made significant improvements to its handling facilities or infrastructure.

Heraklion Port was among the three finalists due to this year’s innovations that led to a successful homporting procedure implemented in partnership with Italian cruise giant Costa Crociere and the island’s international airport Nikos Kazantzakis.

Among the port’s interventions that impressed the judges was the duration of the airport to port transfer service for cruise passengers (only 15 minutes) that took place with all certified security procedures.

Also taken under consideration were the innovative services for passengers aimed to enhance their stay at Heraklion, such as the mobile phone application “Heraklion City Guide” and the “City info on Wheels” service.

According to an announcement, Costa Crociere will continue its successful cooperation with Heraklion Port. At this year’s Seatrade Med event, MSC Cruises and Disney Cruise showed high interest to homeport at Heraklion Port.

The Seatrade Insider Cruise Awards are one of the highest accolades in the industry. Ports that take part are judged by an independent panel of experienced cruise line specialists.