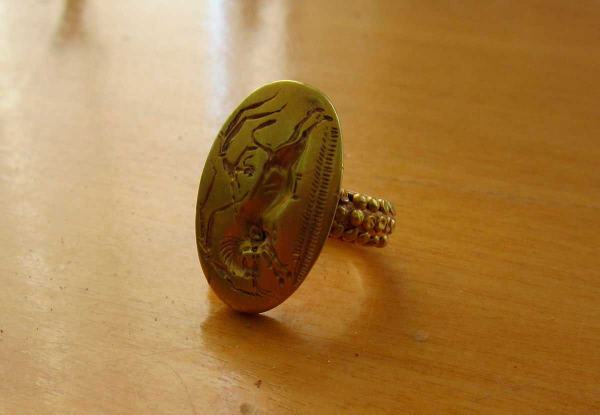 The artefacts that had been stolen last year from the Olympia Museum of Ancient Olympic Games were recovered on November 24.

Police has already arrested three Greek nationals out of five suspects considered to be involved in the case, after an undercover officer posing as a potential buyer negotiated with one of the suspects in order to buy a 15th century BC gold ring. Following their arrest, one of the suspects -a 41-year-old man, who is in fact considered to be the mastermind of the robbery- led the police to the rural area of Koskinas village, near Olympia, where all of the 76 stolen artefacts were found within a sack buried in the ground.

On February 17th, 2012, at 7:30 am, two armed masked men intruded undetected the Museum of Ancient Olympic Games premises. After overpowering and forcing the two guards to disarm the alarm system, they smashed the display cabinets and stole over 70 artefacts, mostly bronze and clay figurines, dating back from the Mycenaean to the late Classical era.

Armed burglary in one of the most prestigious ancient sites of Greece, resulting in the loss of invaluable archaeological treasures, naturally raised questions about museum security and antiquities protection, in the aftermath of budget and personnel cuts in the museums and archaeological sites of Greece, as part of the austerity measures imposed by the government. Particularly, since Olympia robbery was the second major museum theft that year, only weeks after the National Gallery in Athens was burgled and a Picasso painting stolen. Soon after the robbery in Olympia, the then Culture Minister Pavlos Geroulanos tendered his resignation, which, however, was not accepted.

The arrests mark the first major reported breakthrough in the case since the robbery occurred. The valuable antiquities are now safely kept in the Ancient Olympic Games Museum of Olympia and will be put back on display next week, along with the digital exhibition on the history of the most renowned games of Greek Antiquity.