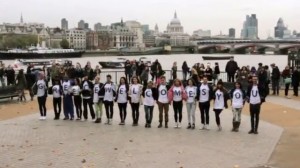 One of the Greek highlights at this year’s World Travel Market in London, UK, was the flash mob event organized by the Greek Tourism Ministry and the Greek National Tourism Organization on the banks of the River Thames in London under the message “Greece Welcomes You.” The event aimed to promote Greece abroad, a press release issued by the Tourism Ministry said.

The flash mob event was filmed and, according to the ministry, two videos of the event will be used to promote Greek tourism online via social media and youtube. The videos will also be screened at international exhibitions and via airline displays.

The first video -that also includes footage of Tourism Minister Olga Kefalogianni- was recently released on the tourism ministry’s youtube channel but caused controversy in the Greek media as some claimed that “nothing in the video resembles Greece.”