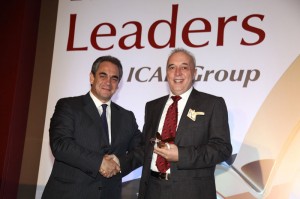 President and CEO of Avis Hellas Alkis Pettas (right) accepting the True Leader award from Konstantinos Michalos, president of the Athens Chamber of Commerce and Industry.

The Greek branch of Avis Rent a Car was recently honored with the prestigious True Leader award by ICAP GROUP. This is the second time Avis Hellas is included among Greece’s “True Leaders.”

The “True Leader” award was given to companies and groups that met specific criteria and recorded high performance and progress in 2011 despite continuing weak economic conditions.

Avis Hellas responded to four measurable and objective criteria namely Profitability, Personnel Growth, Credit Rating and Position in their industry:
– Included in the 500 most profitable companies based on EBITDA, for 2011
– Being among the 500 companies that have increased their employees base from 2010 to 2011
– They are in the top 10 positions in their industry (based on revenue)
– Have high ICAP Credit Score

Avis Hellas is among the 50 most profitable companies in Greece and in 2011 occupied the 21st position, climbing one place from the year before.

The company has an extensive network of 77 branches and a fleet of 35,000 vehicles and effectively meets the needs of renting and leasing cars. The company also specializes in selling used cars to car dealers.