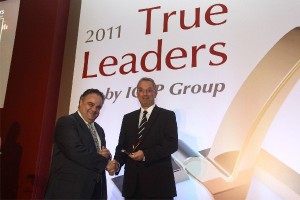 The deputy general manager of Autohellas-Hertz, Dimitris Maggioros, accepting the True Leader award on behalf of the company.

This is the only institution that honored companies and groups that met specific criteria and recorded high performance and progress in 2011.

Among 24,000 companies-groups, only 42, including Autohellas-Hertz, responded to four measurable and objective criteria namely Profitability, Personnel Growth, Credit Rating and Position in their industry:

– Included in the 500 most profitable companies based on EBITDA, for 2011
– Being among the 500 companies that have increased their employees base from 2010 to 2011
– They are in the top 10 positions in their industry (based on revenue)
– Have high ICAP Credit Score

Autohellas SA-Hertz in Greece has a fleet of 25,000 cars that circulate from 120 stations, including 21 airports, and has a staff of more than 520 well-trained employees.