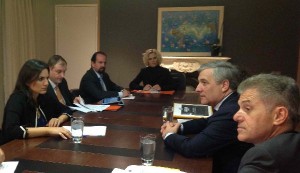 Greek Tourism Minister Olga Kefalogianni during her meeting with Antonio Tajani, Vice-President of the European Commission, responsible for Industry and Entrepreneurship, today in Athens.

“Unfortunately there is no coherent policy for tourism on a European level and we, as a country in the South, request such a policy that would allow mostly countries of the South that have been tested in the crisis to support this very important sector for the economy,” Mrs. Kefalogianni said after the meeting.

The tourism minister said the Greek side requested specific and coherent policies for tourism and for assistance on issues such as social tourism on a European level.

“We believe that Commissioner Tajani will be a tremendously good supporter of the effort Greece is making for tourism development,” she said. 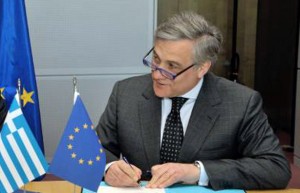 Antonio Tajani, Vice-President of the European Commission, responsible for Industry and Entrepreneurship

EC Vice President Tajani was the keynote speaker on the first day of the Association of Greek Tourism Enterprises’ (SETE) 11th conference on “Tourism and Development – Marketing Greece, Promoting the quality side of Modern Greece” held today.

Mr. Tajani illustrated how the Commission intends to strengthen the European industry, as detailed in the Commission Communication of 10 October 2012 and he explained how Greece could benefit from the proposed actions.

He also explained the Commission policies to promote Europe as a tourism destination in high growth markets and to develop travel during the traditional low season.

Mr. Tajani’s agenda will include discussions focused on prospects for sustainable growth from the marine and maritime sectors, including the development of cruise tourism that offers good growth prospects for Greece with its many islands.

Discussions will also cover current Commission plans for visa facilitation/simplification, which aim to encourage growth in tourism from emerging markets.