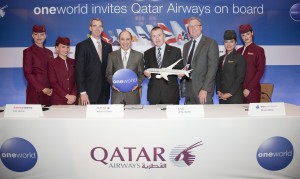 Qatar Airways is to join oneworld, adding one of the world’s fastest growing and most highly rated airlines to the world’s leading quality airline alliance, according to an announcement made yesterday, 8 October,  at a press conference in New York, US.

Qatar Airways, named Airline of the Year for the past two years by the Skytrax independent airline quality rating agency, is the first of the three major airlines based in the Gulf to sign for any of the global airline alliances.  It is also the second largest full service airline in the world not, until today, aligned to one of big global airline alliances.

The Doha-based airline’s implementation into oneworld is expected to take between 12 and 18 months.

The carrier is set to move into a brand new home in 2013 with the opening of the New Doha International Airport, designed to strengthen its position as a premium global hub with an eventual capacity for 50 million passengers a year.

As a member of oneworld, Qatar Airways will fly alongside some of the biggest and best brands in the airline business. British Airways will serve as its sponsor in joining oneworld, supported by the central oneworld alliance team, mentoring the recruit through its alliance implementation program.

Qatar Airways will be oneworld’s second member airline based in the Middle East, alongside Royal Jordanian (since 2007).