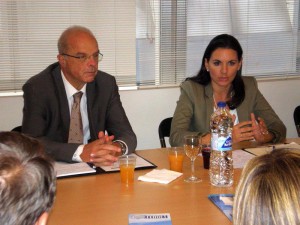 Greek Tourism Minister Olga Kefalogianni requested cooperation at all levels with all tourism professionals, yesterday, 4 October, while attending a board meeting of the General Pan-Hellenic Federation of Tourism Enterprises (GEPOET).

During the board meeting, Mrs. Kefalogianni was briefed on a series of “open issues” of the tourism sector that need to be resolved such as the sharp decline of organized tours in the country and the pending liberalization of the KTEL intercity bus profession.

It is noted that although Greek tour buses face various restrictions in regards to transport, KTEL buses have the permanent monopoly of intercity transport until 2019 (Law 3534/2007) and have a 50 percent reduction on road tax.

The federation reported that KTEL buses also intrude on the turf of tour buses and “steal” their routes, as do buses with foreign license plates.

The tourism minister also discussed the country’s promotion abroad, the opening hours of museums and archaeological sites, cruise ship homeporting requirements and the establishment of a special electronic seal of authenticity for Greek tour buses.

In addition, GEPOET informed the minister that small and medium enterprises (SMEs) were on the verge of closing and underlined the need for their liquidity to be restored through new TEMPME*-type (Credit Guarantee Fund for Small and Very Small Enterprises) programs.

“All these issues are parameters of a comprehensive intervention for the sake of tourism,” Mrs. Kefalogianni said.

She added that for all issues to be settled, the concurrence of other ministries (Development, Economy, Aegean, Transport) was required.