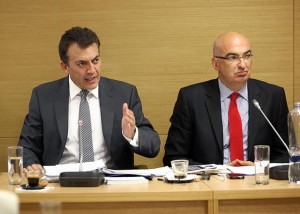 Employer contributions to the national health insurance fund IKA-ETAM will be cut by five percent next year, Labor Minister Ioannis Vroutsis informed the Hellenic Chamber of Hotels on Monday 10 September. The reduction next year will follow an already announced reduction of 1.1 percent in social security contributions.

The minister, who attended the chamber’s Board of Directors meeting, said the aim of the Greek State was the direct reduction of non-wage labor costs to support the “national effort to reduce high unemployment.”

Mr. Vroutsis also said the entire plan for the simplification of labor laws should be completed by July 2013.

He requested for the hotel chamber to contribute to the process with data from the Institute for Tourism Research and Forecasts (ITEP).

On his part, the hotel chamber’s president, Yiorgos Tsakiris, requested for the minister to intervene in regards to the pending issue of the OAEE (Insurance Organisation for the Self-Employed) contributions that small family hotels with a capacity of less than 10 rooms are obliged to pay.

The chamber’s president has argued in regards to “the unfairness” since rented rooms of the same capacity are excluded from such contributions.

In regards to combating undeclared work (also termed as “black work” in Greece) that distorts competition, the labor minister agreed to cooperate with the hotel chamber.

According to reports, it was discovered recently that “black work” at Greek tourism destinations had reached some 30 percent this summer.

Schengen Visas In The Spotlight

Greek Aviation, Land Transport To Change For The Better