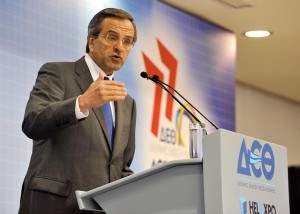 At this year’s Thessaloniki International Fair, Prime Minister Antonis Samaras disregarded tradition and did not announce any government plans for 2013. He did, however, assure the audience that the soon to be announced (austerity) measures would be the last ones.

During the inauguration ceremony of the 77th TIF, the PM did not deliver the customary economic policy address for the following year but instead made a brief statement.

In his statement, Mr. Samaras did not make any direct reference to tourism but focused on entrepreneurship, exports, bureaucracy etc. Greek tourism professionals, however, seemed not to be bothered.

The president of the Hellenic Association of Travel and Tourist Agencies (HATTA), Yiorgos Telonis, told GTP he was “convinced” that the Prime Minister puts tourism very high on the Government’s agenda.

He pointed out that the fact the PM re-established an independent Tourism Ministry once he assumed office, speaks for itself.

“I am therefore convinced that the lack of reference to tourism, during his speech at the TIF, was unintentional and that tourism is one of his top priorities,” Mr. Telonis concluded.

On his part, the president of the Hellenic Federation of Hoteliers, Yiannis Retsos, said the Prime Minister himself “has shown a keen personal interest on tourism issues.”He added that the government has revealed a particular “agenda” that is discussed with the tourism industry.

“The hotel industry awaits the implementation of commitments that have already been announced,” he said.

“The degree of implementation of these commitments—in conjunction with the necessary reforms and interventions throughout the economy, privatizations and the investment environment of entrepreneurship and fiscal adjustment—is the factor that will determine how effective the government’s work is, whether references to tourism are made or not,” Mr. Retsos told GTP.

During his statement at the 77th TIF, PM Samaras did mention that the reduction of the VAT rate on food catering services (restaurants, hotel restaurants, etc.) from 23 percent to 13 percent remained among the government’s goals.