The Association of Greek Tourism Enterprises (SETE) on Wednesday 5 September announced the launch of a fundraising campaign to promote gastronomy tourism to enrich the country’s portfolio in tourism services and products.

SETE’s first attempt to promote gastronomy tourism came two years ago when it presented the study “Gastronomy in the marketing menu of Greek tourism” to tourism professionals and the (then) leadership of the Greek National Tourism Organization. 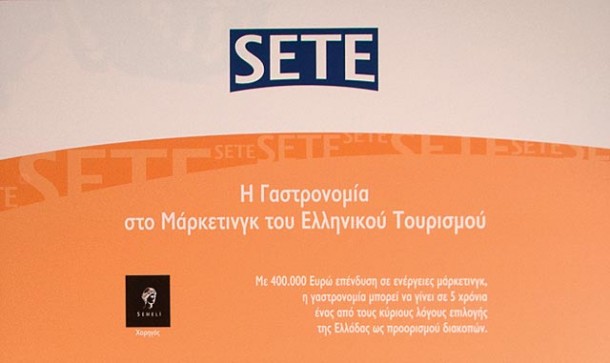 “Gastronomy in the marketing menu of Greek tourism”

According to the association, through an investment of some 400,000 euros in specific marketing actions, over the next three years, Greek gastronomy could be one of the main reasons tourists would choose Greece as a holiday destination.

SETE has underlined that the implementation of the study’s findings could benefit the entire tourism sector and all companies and organizations that are directly or indirectly associated with gastronomy.

When the “Gastronomy in the marketing menu of Greek tourism” study was first presented, SETE had underlined that if Greece’s tourism leadership did not adopt the study then the association would turn to synergies in the private sector to promote gastronomy tourism.

The association’s exclusive communications partner of the fund raising campaign with a pro-bono contribution is PRC Group-The Management House.