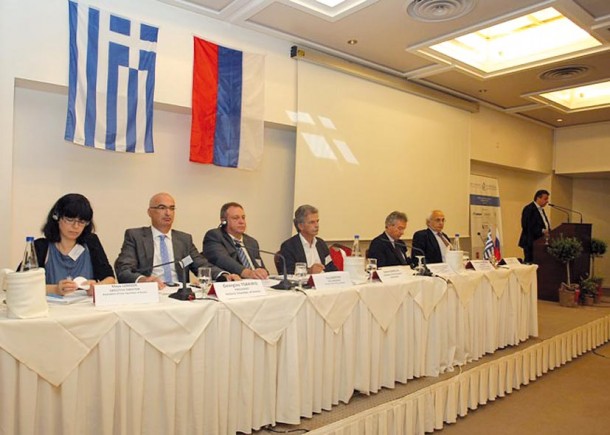 Greece seems to be focusing more and more on attracting Russian tourists and prospects are positive since arrivals from Russia are expected to exceed one million this year as it was announced at the Greek-Russian tourism forum “Chartering the Future” held 3-4 September on Crete. The Greek-Russian chamber of commerce organized the forum.

“The picture has now changed with the German and UK markets accounting for some 30 percent of arrivals (down from 40 percent) and Russia accounting for 18 percent, which indicates a shift towards the East,” the president of the Association of Greek Tourism Enterprises (SETE), Andreas Andreadis, said.

Mr. Andreadis said the increase in Russian arrivals was expected to exceed some 30 percent compared to 2011 when visitors from Russia had already increased by some 64 percent (740,000 tourists) from 2010 (400,000 tourists).

However, the visa issue and lack of air connections were mentioned as the main obstacles for the further increase of tourism flow between the two countries.

The association’s president underlined that although the Greek side in recent years showed progress in visa facilitation, improvement (such as increasing the number of visa centers) was mandatory.

Mr. Andreadis said SETE would help facilitate the process and insisted on the usage of multiple visas and electronic visas.

SETE has estimated that the current procedure to obtain a visa, deprives Greece of some three million Russian visitors, five billion euros in direct and indirect revenue and 80,000-100,000 new jobs.

The Russian delegation also focused on the visa issue and proposed for the appropriate agencies to consider issuing electronic visas to Russian nationals.

The Russians also requested for the number of necessary documents to apply for a visa to be limited and for tour operators to be considered qualified to issue visas.

Yury Barzykin, the vice president of the Russian Union of Tour Industry, called for “essential improvements” on the visa issue that would significantly increase the flow of Russian tourists to Greece.

He also mentioned the necessity to increase the connections of Russian cities connected to Greece by air.

On his part, the president of the Hellenic Chamber of Hotels, Yiorgos Tsakiris, noted that Greece ranked seventh most popular destination for Russian tourists.

“In order for Greek tourism to play the leading role in the development of the economy and of the country, we have studied and agreed to the gradual implementation of a new tourism model and this is exactly where opportunities for new investment and activity in the Greek tourism market will be created,” the chamber’s president said.

Mr. Tsakiris mentioned a five-axis scheme the chamber would promote for Greek tourism to play the leading role in the development of the economy and of the country.

The scheme includes the development of all-year-round tourism; the upgrade of the country’s basic “sun and sea” tourism product; the detachment of Greece’s dependence on just two tourism markets (UK and Germany); the improvement of hotel infrastructure; and the development of city tourism (city breaks) for the Greek capital.