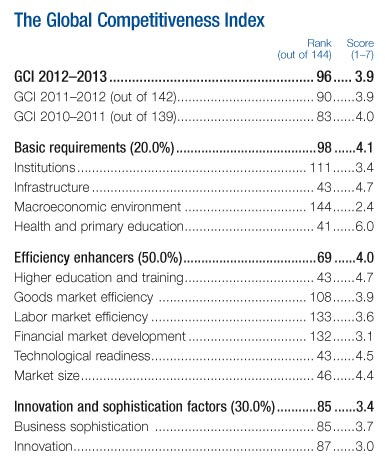 Greece this year dropped another six places in the rankings of 144 countries from 90th place to 96th in the Global Competitiveness Report 2012-2013, released by the World Economic Forum this week.

According to the report, Greece, in the context of the ongoing sovereign debt crisis, continues to fall in the macroeconomic environment pillar, dropping to “rock bottom” 144th position this year.

Similarly, Greece’s financial markets are assessed more poorly than in the past, down to 132nd from 110th last year, showing particularly low confidence on the part of investors.

The report noted that another major area of concern was the country’s “inefficient” labor market (133th), which continues to constrain Greece’s ability to emerge from the crisis, highlighting the importance of recent efforts to increase the retirement age and increase labor market flexibility.

The report underlined that Greece has a number of strengths on which it can build (such as a well-educated workforce) to overcome the present difficulties.

“With the correct growth-enhancing reforms, there is every reason to believe that Greece will improve its competitiveness in the coming years,” the World Economic Forum report concluded. 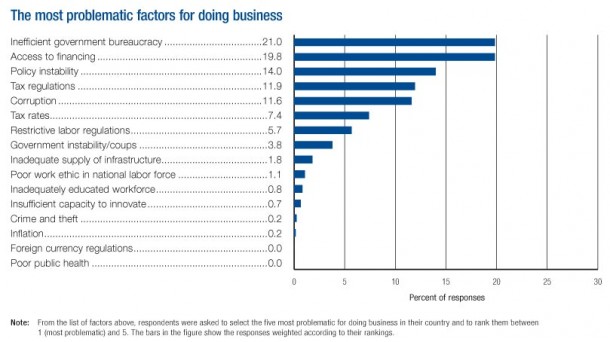 Most problematic factors for doing business in Greece

These and other Northern and Western European countries dominated the top 10 with the Netherlands, Germany and United Kingdom respectively ranked 5th, 6th and 8th. The United States (7th), Hong Kong (9th) and Japan (10th) completed the top 10.