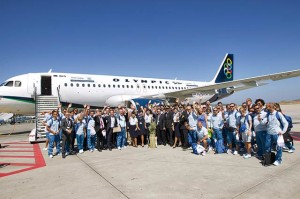 The Greek Olympic team and the Olympic Air crew in front of the Airbus A320 right before takeoff to the 2012 London Olympic Games. Olympic Air, official sponsor of the Hellenic Olympic Committee, carried the athletes to London on 23 July and 13 August. The same aircraft brought them back to Athens. The airline is also supporting the Hellenic Team that will participate in the Paralympic Games (29 August-9 September). Olympic Air carried the Greek athletes from Athens to London on 22 August and will fly them back to Athens on 11 September.

ECTAA: Still No Refund For Spanair And Malev Customers