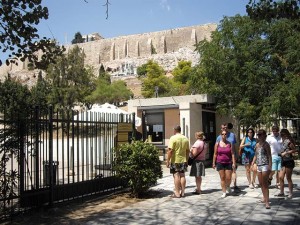 In early August the Education, Religions, Culture and Sport Ministry announced the official extension of opening hours for Greek museums and archaeological sites for the summer season (May-October), following the hiring of seasonal staff to carry out double shifts.

“As always, HATTA will assist in the effort to improve the (country’s) tourism product and for the qualitative improvement of tourism services, especially in the sensitive field of culture,” the president of the Hellenic Association of Travel and Tourist Agencies (HATTA), Yiorgos Telonis said last month.

In a meeting with the Alternate Minister of Culture, Costas Tzavaras, Mr. Telonis pointed out troubles that derived from the unsteady summer and winter time schedules of Greek museums and archaeological sites.

Specific issues such as the need for an extension to the opening hours of the Acropolis over the weekend and the creation of a system for the presale of entrance tickets for organized groups of tourists were discussed.

On his part, Mr. Tzavaras informed that a joint ministerial decision for the operation of museums and archaeological sites beyond the scheduled opening hours would soon be completed. Tourism professionals have constantly requested for the government to intervene so tourists that arrive after the closing time of museums and sites – via cruise ship for example – to be able to enter the grounds.