Greece Is The Word For Hollywood Celebrities 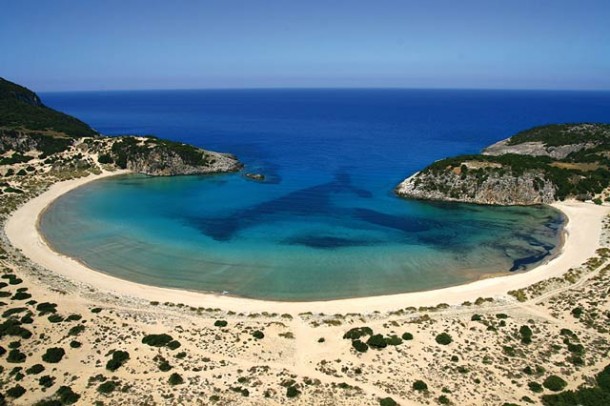 International celebrities such as Ethan Hawke and Hollywood couple Brad Pitt and Angelina Jolie took time off from “Tinseltown” and were spotted vacationing last month at the luxury resort of Costa Navarino in Messinia. Pictured is Voidokilia beach located a stone’s throw away from the resort.

Tourism Minister Olga Kefalogianni will consider adding another form of tourism to the Tourism Ministry’s portfolio, that of cinematic tourism, the Greek press reported last month.

The tourism minister’s decision followed a meeting with Hollywood star Ethan Hawke who at the time was in Greece for a film shoot and was residing in August at the Costa Navarino resort in Messinia in the Peloponnese.

The press said he advised Mrs. Kefalogianni on ways to attract other international celebrities to Greece and promote the country as a tourism destination.

According to research, the use of exotic locations in Hollywood films has allowed global audiences to enjoy potential tourism destinations and thus has generated new tourist industries around the world.

Ethan Hawke was not the only international celebrity spotted in Greece last month as it was reported that quite a few were seen vacationing in the country.

Tom Hanks was spotted on Antiparos with his Greek wife Rita Wilson and Jon Bon Jovi opted for Kerkyra this summer.

Robert de Niro and John Travolta were reported to have visited the Acropolis in Athens and then sail to Santorini on a private yacht.

According to Euronews, John Travolta commented on how safe Greece is. “Everybody is happy and there are no problems. Sometimes the news makes thing look worse than they are, but this has been like a dream,” he said.

On his part, Robert de Niro said he was happy they came to Greece. “It’s great, terrific. I will come back and I will see every island in Greece… In the next few years. I hope I live 50 years, but I doubt it,” he told Euronews.