The prolonged recession of the Greek economy and the country’s unpopular austerity measures that have included tax hikes, salary and pension cuts, high income tax payments and soon the second instalment of the infamous “haratsi” (special property tax) will most likely keep Greeks home this summer.

Greeks are said to account for a quarter of tourists in the country annually. 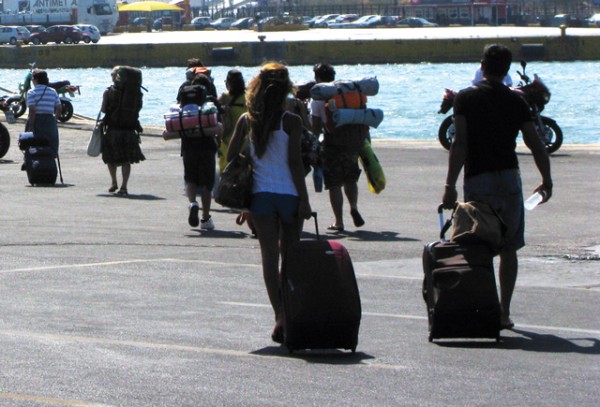 Greeks expected not to travel this summer.

Greek tourism professionals last month referred to a “domestic tourism collapse,” citing a reduction of Greek tourists in traditional destinations, a decline during the usual reservation period and the reduction of days of stay.

Clouds began to form for domestic tourism in early June when it was noticed that not many Greeks traveled during the first summer weekend holiday of Agiou Pnevmatos (Holy Spirit) in early June -usually a busy three-day weekend, similar to Memorial Day in the US.

Last year, domestic tourism in Greece dropped by some 20 percent and the first predictions made for 2012 referred to a 40-50 percent decline.

In May alone, Greek passengers on domestic flights dropped by some 12.7 percent (435,544 passengers from 498,784 compared with the corresponding period of 2011). In June, domestic flights saw another major drop in arrivals as they declined by 16.9 percent.

Additionally, the annual nationwide survey conducted by the General Consumer Federation of Greece (INKA) showed that 69 percent of Greeks said they had not planned to take a vacation this summer –an increase from 62 percent last year.

The reasons Greeks are staying home this year are: financial (69 percent), job and income insecurity (21 percent), professional obligations and other reasons (10 percent).

INKA also calculated that the minimum cost for a 15-day holiday for a four-member family added up to some 3,000 euros.

Meanwhile, high ferry fares were also mentioned last month as one of the main reasons Greeks would avoid the islands this summer. Press reports noted that a four-member family with a private car would have to pay some 400 to 600 euros depending on the destination.

INKA confirmed this through its survey as it noted that consumer complaints on coastal shipping (transport costs for a car or just one person) for this year’s summer season added a feeling of insecurity for a journey and hence reluctance to plan holidays on the Greek islands.

On their part, fearing the worse for domestic tourism, Greek hoteliers last month began to make special offers and discounts of up to 30 percent in some destinations that apply until the end of August.