SETE Holds General Assembly Prior To Second Round Of Greek Elections

“A capable and functional government with pro-European orientation in the Eurozone must arise from Greece’s second round of elections on 17 June,” the president of the Association of Greek Tourism Enterprises (SETE), Andreas Andreadis, said last month during the association’s 20th General Assembly.

SETE’s annual general assembly took place this year while Greece’s political parties were preparing for “round two” of the country’s general elections since the first round on 6 May failed to form a cohesive government. 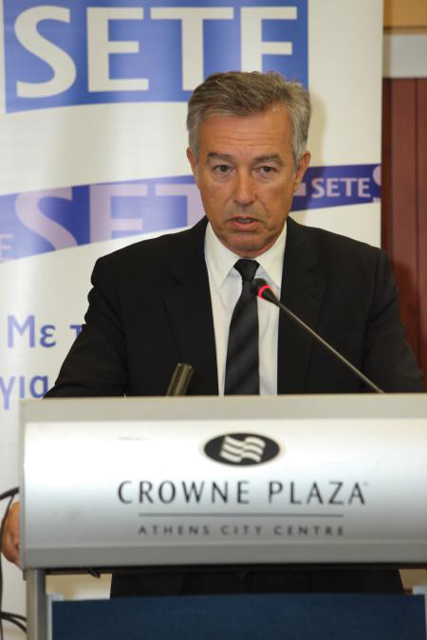 “Greece’s stay in the Eurozone and gradual development into a modern European economy depends on the outcome of the next election and how our political system will manage it,” SETE’s president said during his speech.

In regards to direct horizontal measures to restart the Greek economy, Mr. Andreadis focused on the resumption of business financing from the banking system and the establishment of a stable and attractive fiscal environment.

SETE’s president focused on the abolition of bureaucracy, the Greek public sector “hostility” towards new business efforts and called for the full, no strings attached, opening of certain “closed” professions.

Specifically, he mentioned the taxi profession, which was not liberalized completely and the KTEL intercity buses that continue to engage in unfair competition at the expense of tour buses.

The opening of the taxi and KTEL bus driver professions was part of a reforms package promised to Greece’s international creditors.

He then referred to the association’s strategy for Greece’s tourism development for the 2011-2021 decade. The Government and all opposition parties unanimously accepted the strategy last year during SETE’s tenth annual tourism and development conference.

Mr. Andreadis focused on the visa Schengen problem and stressed it must finally be resolved. According to tourism professionals, changes to the current visa policy would boost arrivals to Greece by some three million visitors, bring in direct and indirect revenue of five million euros and create 60,000-100,000 new jobs.

Measures to boost tourism also include a VAT reduction on the entire travel package, the reduction of the VAT rate on catering services to 13 percent and the strategic development of aviation.

He also called for the launch of a program to address the ongoing problems of the Greek capital, the completion of the special zoning plan for tourism and a plan for the support of coastal shipping.

In conclusion, SETE’s president called for the immediate operation of the public-private marketing company for Greek tourism, the establishment of which was approved in Parliament before the first round of general elections.

“None of the measures to support tourism has a political color… Therefore I can not believe that in such a difficult moment for the country, it is not perceived by the political parties that tourism could show the way out of the crisis,” he said.

According to Mr. Andreadis, the initial goal for the country’s tourism in 2012 was to attract 16 million arrivals and 10 billion euros in revenue.

One of the main topics among tourism professionals, on the sidelines of SETE’s 20th General Assembly, was the major drop in international bookings after Greece’s first round of parliamentary elections due to the political instability of the country.

Reports said that one month after the country’s first round of elections, hotel reservation systems showed a 30-50 percent drop (this decline included cancellations in five-star hotels).