“I believe Greece deserves more attention, especially currently, because it has an immense touristic potential,” Amadeus Vice President of the Northern, Eastern, Central and Southern Europe (NECSE) region Petra Euler, told GTP in May, within the framework of the company’s 2012 NECSE Management Meeting.

Amadeus chose Greece this year to host the company’s annual NECSE Management Meeting to show that it supports the country’s efforts to recover from the crisis and contributes actively in this direction. 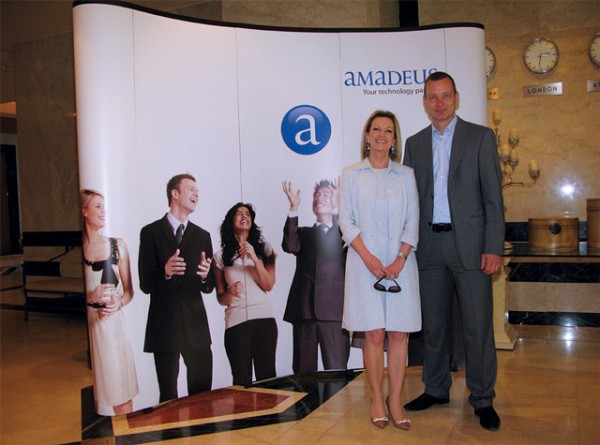 “Amadeus Hellas is a key member of the CESE team and plays a pivotal role for the growth of the region,” Mrs. Euler underlined.

But with Greece in the midst of its fifth year of recession, one would think that such a situation would hold back travel agents from pursuing online business opportunities. Amadeus, however, tells us that this is not the case.

“Amadeus is doing extremely well in Greece as a result of its long term and cautious strategy that is invested in strong customer relationships,” Amadeus Director for Central, Eastern and Southern Europe Lutz Vorneweg said.

“It’s quite fascinating to see that we can really turn such a crisis into an opportunity for our customers and enable them to succeed,” he told GTP.

What next for travel agencies?
In regards to future plans, Amadeus sees great potential in the hotel business and aims to assist travel agencies to offer more to their customers than “just an air ticket.”

Amadeus has already launched new business opportunities for travel agencies by enriching the “Hotel Distribution” content and in parallel is working on new hotel IT solutions.

“In Greece, apart from the successful ‘Content Inn by Amadeus’ hotel platform, we are in the process of launching ‘Amadeus Hotel Plus Multisource,’ a GDS platform with new possibilities,” Mrs. Euler said.

Using social media for business
In regards to social media, Amadeus, as the technology partner for the travel industry, intends to steer the whole social media traffic (twitter, google+, facebook, etc) to one channel for travel agencies.

“We are providing travel agencies with a strategic booking tool (not a simple fan page) to leverage their business,” Mrs. Euler told GTP. Amadeus presented this social media approach at ITB Berlin in March 2012 and received positive reviews.

In Greece, total online population is estimated at some six million based on IAB Hellas and Bari Focus with an online penetration estimated at some 60 percent.Facebook, the most popular social media, is recording some 3.700.000 Greek users.

However, only the very big online travel agencies are in fact investing in social media and use facebook for branding, awareness, customer relationship marketing, generating traffic through offers, games and competitions.

“It is quite difficult for traditional travel agencies to embrace change and evolve in the online arena adopting new technologies, new online tools and trends,” CESE’s director, Lutz Vorneweg, mentioned.

“Amadeus’ role as the travel industry’s technology partner is to show travel agencies the way to the future, ‘educate’ them with regards to online business and social media, equip them with the right tools to enable them to evolve and succeed,” he concluded.

Amadeus plans to launch its social media platform by the end of 2012 to empower travel agencies to embrace the social media networks successfully.

THIS IS MY ATHENS Volunteers Give Tour Of Athens