“It is unrealistic to expect an increase in arrivals to Greece this year,” Taleb Rifai, the secretary general of the World Tourism Organization (UNWTO) said last month during a joint press conference in Athens with Culture and Tourism Minister Pavlos Yeroulanos.

However, Mr. Rifai gave a vote of confidence for Greek tourism and estimated that arrivals to the country this year would follow the trend noticed in the rest of Europe.

According to the secretary general of the UNWTO, Europe will see a 3.3 percent rise this year compared to 2011 and Greece would see a moderate increase in arrivals, below last year’s nine percent increase.

Mr. Rifai underlined that arrivals to Greece will depend greatly on the facilitation of the visa process from markets such as Russia and China. 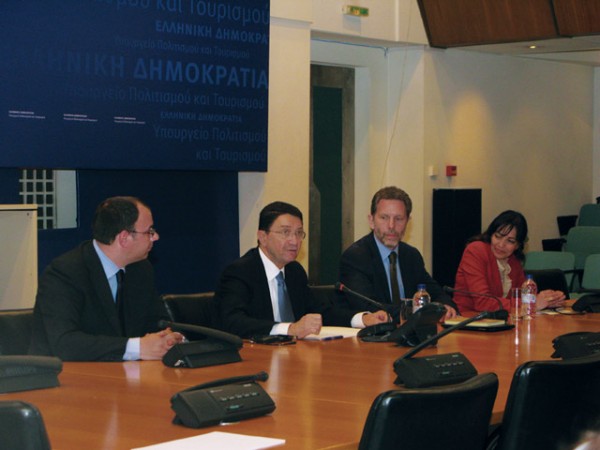 Culture and Tourism Minister Pavlos Yeroulanos (third from left) looks on as UNWTO Secretary General Taleb Rifai addresses the Greek media on issues and challenges facing tourism in the context of the current economic situation in Europe.

On his part, Culture and Tourism Minister Pavlos Yeroulanos avoided to make a forecast in regards to the progress of Greek tourism this summer as he said it was “too early.”

The culture and tourism minister said early bookings from Germany were not on the expected level (they were reported down by 20-30 percent) and therefore brought “bad news” for Greek tourism. However, he added that he did not believe the phenomenon was general and would affect the final results.

However, recent figures do not coincide with the minister’s optimism.

International arrivals at Greek airports fell 8.8 percent in the first three months of the year, according to data released last month by the Association of Greek Tourism Enterprises (SETE).

In addition, the Institute of Tourism Studies and Forecasts (ITEP) estimated a possible 10 percent reduction of tourism revenue. Such a reduction is said to result in the loss of 70,000 jobs and to cause irreparable damage to the viability of Greek tourism businesses.

Meanwhile, questions were raised in regards to Greece’s promotion campaigns to foreign markets
since a portion of the Greek National Tourism Organization’s available funds in the Bank of Greece had been converted to Greek State bonds and therefore received a “haircut” as orchestrated by EU leaders.

The Greek media said the GNTO’s losses from the “haircut” amounted to some 32 million euros and that such a development essentially ruined the promotion of Greek tourism for this season and any efforts to restore the country’s image to foreign markets.