Athens’ Demonstrations And Illegal Immigrants In The Spotlight

“Mobilizations that do not run under an institutional framework have a share of the responsibility of the deterioration and desolation of Athens city center,” the mayor argued at a press conference.

According to the draft legislation entitled “Public Outdoor Gatherings,” small demonstrations were proposed to be restricted to a single lane of traffic so all roads in the center would not be closed off.

The mayor proposed that organizers of demonstrations be obliged to notify the authorities at least 24 hours in advance or else they would be held accountable for any riot damage in the city center.

The Greek press focused on another section of the proposal expected to spark controversy that foresees the imposition of a two-year jail term to those disturbing a demonstration with violence.

The image of central Athens has been tarnished over the years due to the many problems that surround it such as demonstrations that result in street riots, increased crime, prostitution, drug dealing, strikes, etc.

According to data released last month by the Association of Greek Tourism Enterprises, Athens International Airport saw a 16 percent drop in the January-March period to 352,004 international arrivals. 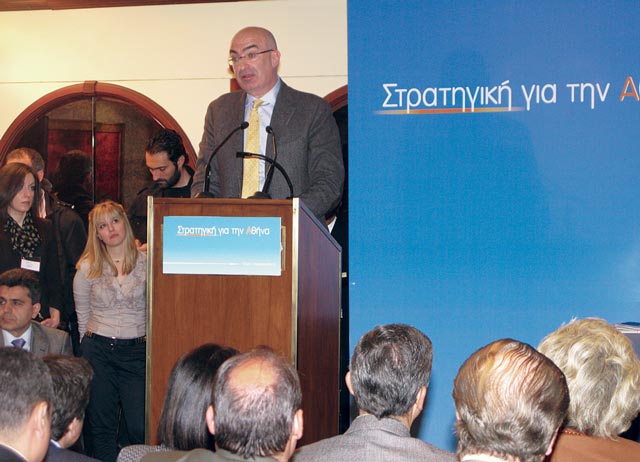 At a recent event in Athens, the president of the Hellenic Chamber of Hotels, Giorgos Tsakiris, welcomed the Athens Mayor’s initiative to curb disruptive protest rallies. “Initiatives such as Mr. Kaminis’ must be fully supported and discussed by all those who want to take steps forward on all levels,” the chamber’s president said in an announcement.

The Athens-Attica Hoteliers Association released data that showed that the drop in arrivals in Attica had a direct impact on the occupancy of Athens’ hotels. In January 2012, occupancy dropped by 18.65 percent and by 20.42 percent in February. In January alone, the occupancy of luxury hotels in the city slumped to 34.5 percent (from 41.8 percent in 2011) and in February alone to 42.9 percent (from 51.6 percent last year).

Athens Center “Clean Up”
Greek Prime Minister Lucas Papademos had recently underlined the need to coordinate the reconstruction of the capital, a goal he described as a “national priority.”

Last month the creation of 30 detention centers for undocumented immigrants in greater Athens was approved in Parliament and caused the anger of local authorities and residents. The citizens’ protection minister has insisted on their creation and said the matter was “non-negotiable,” as he had referred to the illegal immigrants’ presence in central Athens as “a ticking time bomb for public health.”

According to a survey by Kapa Research in which 1,610 Greeks took part, the 61.7 percent agree with the recent government moves to clamp down on illegal immigration.