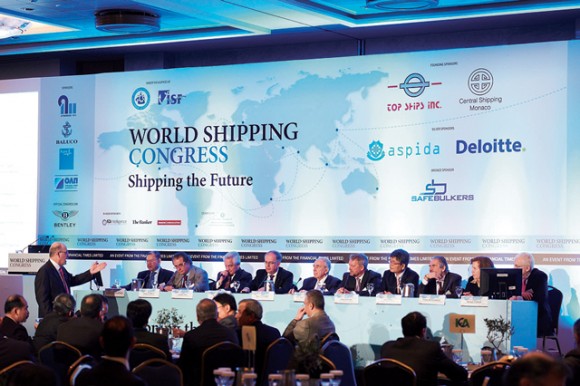 The World Shipping Congress,held at the Divani Apollon Palace in Kavouri, was organized by the Financial Times and Boussias Communications and held under the auspices of the International Chamber of Shipping and the International Shipping Federation.

The oversupply of capacity, the large number of ships under construction, the decline in traffic and the significant decrease of banks funding shipping activities will be just some of the drawbacks shipping companies will face this year, according to the World Shipping Congress held in late February at the Divani Apollon Palace in Kavouri.

However, it was estimated that gradually from 2013 the banking sector would be in a better position than today and the funding to shipping will begin to rise to a beneficial level.

The shipping ministry’s secretary general, Nikos Litinas, who spoke on behalf of the Ministry of Development, Competitiveness and Shipping, noted the necessity of an independent Merchant Marine Ministry.

He highlighted the Greek Government’s support to shipping and to the lifting of cabotage restrictions in regards to the cruise industry.

Deloitte’s George Cambanis caught the attention of the audience when he informed that out of the European companies in the indices of NYSE and NASDAQ, Greek shipping companies hold the second largest share (19 percent) behind the United Kingdom (24 percent) and followed by France (seven percent) and Germany and Italy (four percent).

According to Spyros Polemis, the chairman of the International Chamber of Shipping, problems exist despite the significant presence of Greek shipping companies within the international financial markets.

In connection with specific problems mentioned at the congress such as tight bank financing, tonnage oversupply and drop in cargo movement, Mr. Polemis proposed restraint in new ship orders to balance the market.

He also spoke in regards to the major issue of piracy and stressed that it is a “plague” that must be struck to avoid damage to international trade.

According to the Greek Shipowners Union (EEE), the economic impact of piracy ranges from $7.5 to $14 billion.

However, despite the current crisis, speakers at the congress said the optimistic signs for the future of shipping were apparent. According to Ted Petropoulos, head of Petrofin Research, PSMI, this year is expected to operate steady for European banks.