Greek tourism should not diverge from its target of keeping this year’s international arrivals above 16 million and revenue higher than 10 billion euros, the Association of Greek Tourism Enterprises (SETE) said last month during a press conference to the foreign media. 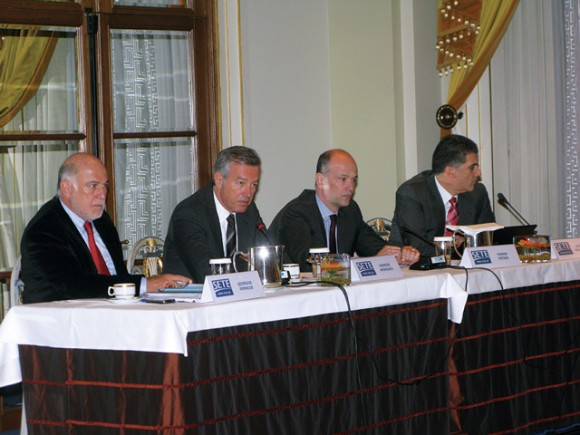 SETE’s President Andreas Andreadis (second from left) informed the foreign press that the association’s action plan for Greek tourism includes the establishment of a marketing company based on public and private sector cooperation. Culture and Tourism Minister Pavlos Yeroulanos said recently that once legal details have been processed, the company’s establishment would be included in a bill of the Development Ministry.

SETE’s president, Andreas Andreadis, told journalists that although early bookings for the 2012 season had showed a drop in demand from last year’s record levels, “the present picture may be reversed.”

Last year Greek tourism achieved an almost 10 percent increase in both international arrivals and revenue despite the country’s damaged image due to street riots and strikes over the debt deal.

The main topic of SETE’s press conference was to inform foreign press correspondents on the association’s action plan for Greek tourism between now and 2020 and in regards to initiatives to reinforce the international tourism market’s confidence in Greece.

SETE announced its intention to take direct action aimed at communicating Greek hospitality and the unique experiences that Greece offers.

The initiative will include communication efforts, as well as familiarization trips for foreign journalists, with the aim of promoting the country’s uniqueness.

UK Travel Federations Urge Greece To Save Its Image