“By the end of 2012, one seventh of the world’s population will have crossed international borders as tourists in a single year,” UNWTO Secretary-General, Taleb Rifai, said in his keynote speech at the official opening of the 46th ITB Travel Trade Show held last month 7-11 March.

Tourism arrivals are expected to reach one billion by the end of 2012 and, according to Mr. Rifai, they are a vital force for economic growth and social welfare. 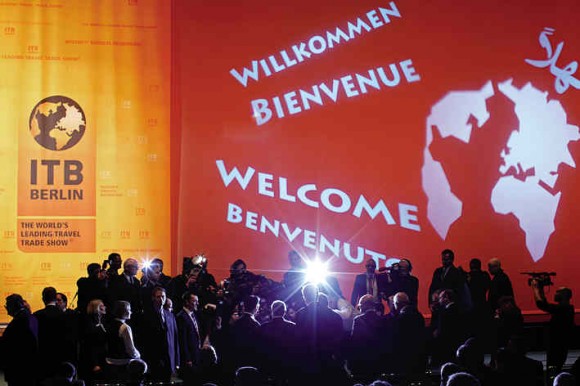 Positive signals for continued growth in the travel sector was obvious at this year’s ITB Berlin, according to organizer Messe Berlin (Berlin International Congress Center).

Among the outstanding features of the 46th ITB Berlin were the increased numbers of trade visitors, exhibitors reporting more contracts signed, and an upsurge in attendance (by 20 percent) of leading figures from the travel industry at the ITB Berlin Convention. This year’s convention covered topics that included the European debt crisis, turmoil in the Arab countries, climate protection and sustainability and EU emissions trading.

In numbers, 113,006 trade visitors (39,7 percent of them from abroad) came to obtain information about all sectors of the international travel industry from the 10,644 exhibitors from 187 countries.

Among ITB Berlin’s highlights was that, as of this year, the international blogger scene is now an established feature of the fair. For the first time at the fair a reception was held for bloggers from all over the world.

The Travel Technology section at ITB Berlin 2012 was larger than ever before, with 236 exhibitors displaying technical innovations. Travel professionals and visitors were introduced to the latest apps and innovations for the fields of mobile travel services and social media.

German Tourists Encouraged To Holiday In Greece At ITB 2012