“Greece does not have tourism… It is very expensive… Greece gains nothing from staying in the Euro,” were just some of the comments made by leading economist and president of the Ifo Institute in Munich, Dr. Hans-Werner Sinn, during his presentation on global economic developments on the first day of the ITB Berlin Convention last month. The presentation was attended by a massive audience of tourism professionals.

During his keynote speech he discussed the problems surrounding the EU bailout plan and highlighted the consequences for future economic developments in Europe and the world.

Dr. Sinn had recently commented in an interview that the cheap loans the euro brought Greece had artificially raised prices and wages and that the country had to come back down from “this high level.

“Some countries (Greece) have to come down to earth,” he said at the ITB convention.

When touching on the subject of Greece, the influential German economist painted a bleak picture in regards to the country’s future in the Eurozone. 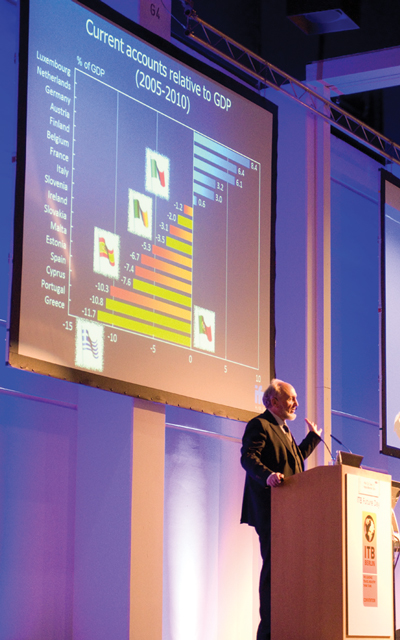 The president of the Ifo Institute in Munich, Dr. Hans-Werner Sinn, shows a chart that refers to current account balances relative to GDP for the period 2005-2010. Current account balance is the sum of net exports of goods, services, net income, and net current transfers. According to the chart, Greece, seen at the bottom of the list of EU countries, is one of the countries of the crisis that has a “trade deficit” as its imports exceed exports. The country’s account balance (% of GDP) during for the period 2005-2010 was recorded at $–11.7 billion. In other words, Greece is currently not a productive country.

During his speech, he mentioned three possible solutions of the “Greek tragedy,” as he referred to the Greek crisis. As a first solution he mentioned an enduring transfer program from the European Union to finance the deficit via rescue packages and memorandums.

A second option, which he personally believes is the correct solution, is Greece’s exit from the euro and the introduction of a depreciated drachma. “The advantage in this case is that the country would become cheaper and thus more competitive,” he said.

The third solution Dr. Sinn referred to sees Greece proceeding with a radical internal depreciation within the euro area that demands major cuts in wages and prices of millions of products and for loans to be redefined.

“Greece would have to reduce its prices by some 30 percent (level of Turkey) so it would rise in terms of competitiveness,” he said.

Dr. Sinn said that such an internal depreciation was an impossible solution, as the harsh austerity measures would push the Greek people to the streets in a resistance “beyond limits.”

He added that the finance ministers of the euro zone consider the internal depreciation solution as most appropriate as they insist on Greece becoming competitive through a cost reduction plan.

Ifo’s president has repeatedly warned in interviews to the media that the money from the new bailout plan for Greece would only help international banks and not the Greek people. He has argued many times that Greece can only solve its crisis if it quits the euro.

He recently told a German online portal that the Greek politicians know that the new bailout plan approved by the finance ministers of the euro zone would not save their country.

“They want to gain time until the next election,” he said.