“It is very important for our country that we are participating for the first time in a consistent European initiative that aims to attract tourism to Europe,” Deputy Culture and Tourism Minister George Nikitiadis said last month after signing a memorandum of understanding to increase tourist flows between South America and Europe.

The signing of the memorandum certifies Greece’s participation in the “50,000 tourists” pilot initiative, based on the cooperation of the European Commission with European governments, the tourism industry and airlines. 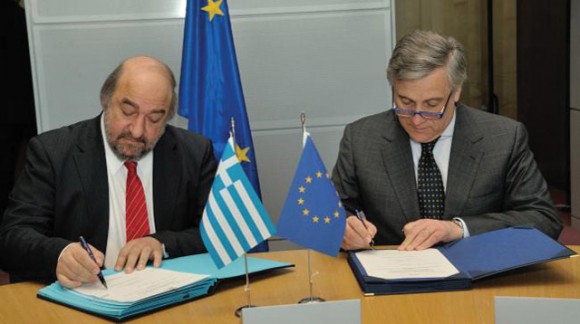 George Nikitiadis, Greek deputy culture and tourism minister and Antonio Tajani, vice-president of the European Commission, responsible for industry and entrepreneurship, last month signed the memorandum of understanding of the “50.000 tourists” pilot initiative.

The cooperation sees the development of the tourism flow between South America and the European Union by making use of available spare airline and accommodation capacity during the low seasons.

Already the memorandum of understanding has been signed by the governments of France, Italy, Lithuania, Spain and Poland and supported by major airline companies Air France, Alitalia, British Airways, Iberia, the Lufthansa Group and TAP Air Portugal in collaboration with the European Tour Operators Association and the European Travel Agents’ and Tour Operators’ Associations.

Global distribution system provider Amadeus is also participating in the initiative. Its expected contribution to the project will focus on the facilitation of technology tools and solutions to deploy the program and track its results and support the European Commission to establish contacts with relevant stakeholders in South America.

In regards to the European Commission’s part in the “50,000 tourists” pilot initiative, it will facilitate and cofinance communication activities and the involvement of South American countries, commencing with Brazil, Argentina and Chile.