Cabotage Said To Finally Be Lifted 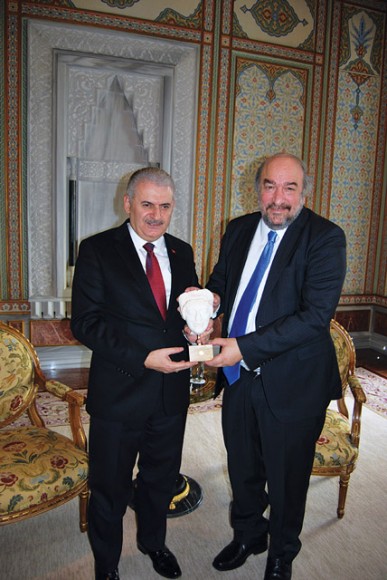 Deputy Culture and Tourism Minister George Nikitiadis (right) spoke at Seatrade’s second Winter Cruising Forum in Istanbul last month and informed that Greece’s cabotage restrictions are to be fully lifted and that the Greek Government plans to form an advisory committee for cruises and tourism. The deputy minister is seen here with Turkey’s Minister of Transport, Marine Affairs and Communications, Binali Yıldırım.

Experts in the tourism sector said they were satisfied that the regulation that previously obliged international cruise companies to sign a contract with the government in order to homeport in Greece would be abolished.

The specific regulation, characterized as a “Greek originality,” had discouraged cruise companies and agreements to homeport in Greece were avoided.

A previous regulation that set time restrictions for cruise ships to stay in each Greek port is also said to be abolished.

In addition, the Piraeus Port Authority recently decided that Greece’s “first-come first-served” system for assigning berths would also be eliminated. The authority said an organized berthing system for booking berths would be introduced as demanded by cruise companies.

It is estimated that once cabotage restrictions are lifted, Greek finances would be boosted by one billion euros per year. However, according to tourism experts, the benefits from the new law would be evident in 2013 as this year’s cruise schedules are “already planned out.”