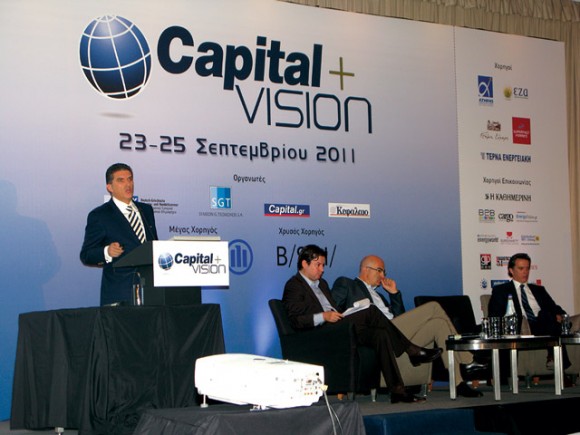 During the session on tourism of the Capital+Vision multi-conference, the general director of the Association of Greek Tourism Enterprises, George Drakopoulos, reiterated the association’s position for an autonomous Tourism Ministry as well as a permanent General Secretary in the ministry.

“The coming years could be very exciting for the Greek tourism product as long as the promises of its establishment within the central development policy actually take place,” the president of the Hellenic Chamber of Hotels, Yiorgos Tsakiris, said recently during the tourism session of the Capital+Vision multi-conference held at Hilton Athens in late September 2011.

While referring to the challenges of Greek tourism in the middle of the economic crisis, Mr. Tsakiris stressed that the government’s initiative to reduce the VAT on accommodation services from 11 to 6.5 percent was one of the reasons this year’s tourism season reached record levels.

However, the chamber’s president criticized the increase of VAT on food catering services from 13 to 23 percent, a move that “will give a negative signal to international markets that Greece is an expensive destination and less competitive compared with other competing countries.”

The chamber’s president also focused on necessary initiatives for Greece to climb to 10th place globally in terms of tourism revenue (as opposed to the 15th position the country occupies today).

GTP was among the media sponsors of the Capital+Vision multi-conference.

Government Called To Care About Shipping