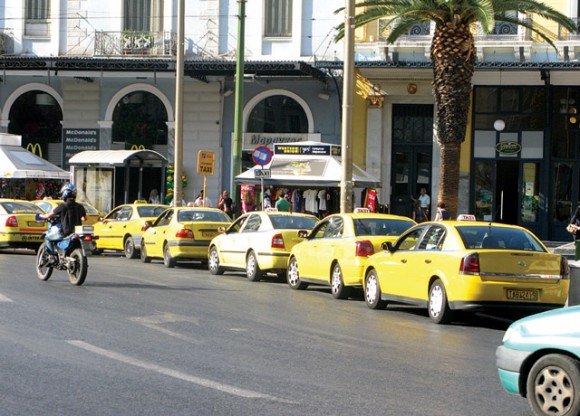 Greek taxi owners and drivers are protesting against the government’s proposed law to liberalize the taxi sector and lift all restrictions on the number of licenses issued.

After a suspension of mobilizations in August, Greek taxi owners and drivers resumed protest action in September in response to the government’s proposed law to liberalize the taxi sector and lift all restrictions on the number of licenses issued.

On 6 September the final draft of the bill was presented and taxi owners and drivers reacted through strikes, though not as extreme as the one held in July.

The taxi drivers demand the application of population-based criteria to determine the number of licenses issued. However, Transport Minister Yiannis Ragousis has refused to negotiate.

The opening of the taxi driver sector would also put an end to a ban that does not allow the service of car rental with a personal driver (Greece is the only European Union country where such a ban applies).

The Association of Greek Tourism Enterprises (SETE) last month tabled a series of proposals to Transport Minister Yiannis Ragousis in regards to necessary requirements of car rental with a driver and ways to improve the tourism related transport performance of taxi drivers (good knowledge of English, politeness, cleanliness, etc.).

The head of the Attica taxi drivers’ union, Thymios Lyberopoulos, claimed last month that the transport minister was “in cahoots” with the tourism industry.

“Mr. Ragousis talks to tourism professionals every day since his intention is to grant them transportation privileges for tourism purposes,” he said.