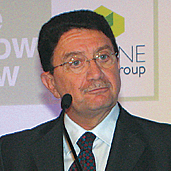 “Greece has returned. Greece is making a dynamic comeback and we can confirm this,” UNWTO Secretary General Taleb Rifai said while citing official data during the first International Congress on Ethics and Tourism that took place in Madrid, Spain, 15-16 September.

On the sidelines of the congress and while in talks with UNWTO’s secretary general on Greece’s rapid growth of tourism this year, Culture and Tourism Minister Pavlos Geroulanos said the whole Greek society had changed its mentality towards tourism, “the spearhead for growth.”

During his trip to Madrid, Mr. Geroulanos also met with Secretary General of Tourism and Domestic Trade of Spain Joan Mesquida and discussed how the two countries could work together to open up to new markets (China, Brazil and India).

On an international level and according to the UNWTO, tourism grew by almost five percent in the first half of 2011 (6.6 percent increase from 2010) and totaled a new record of 440 million arrivals (19 million more than in the same period of 2010).

Minister On Future Plans For Tourism